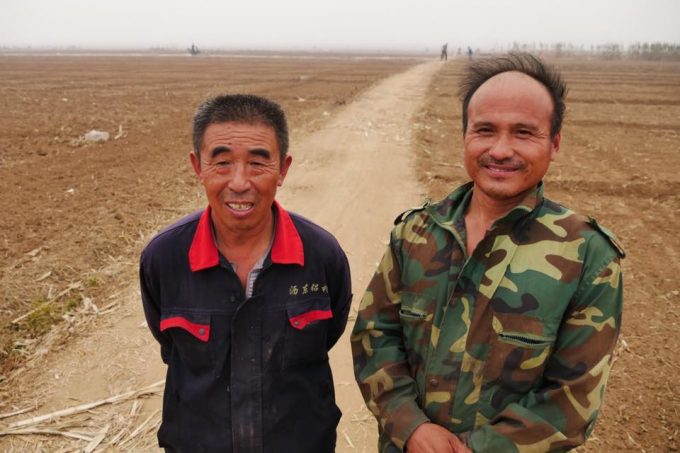 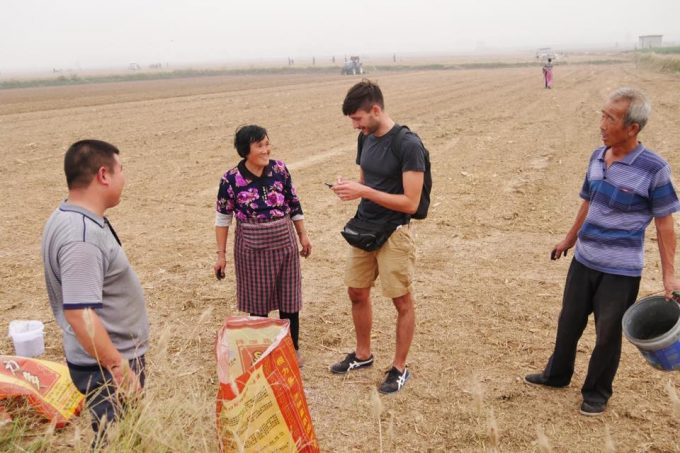 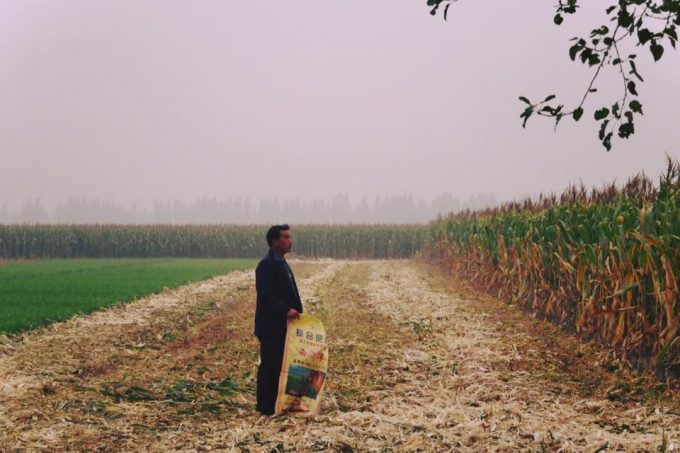 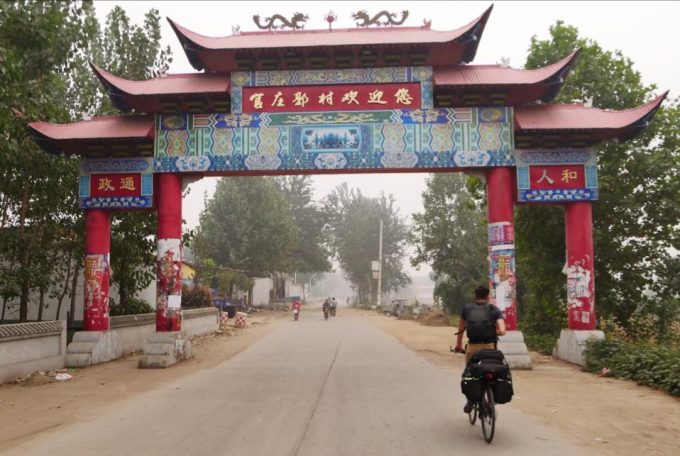 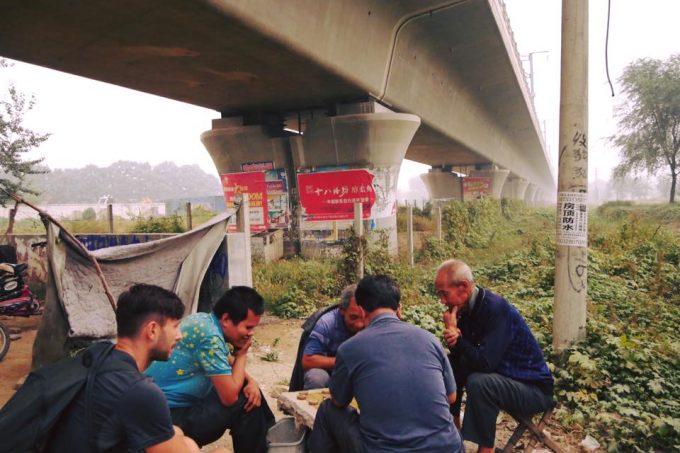 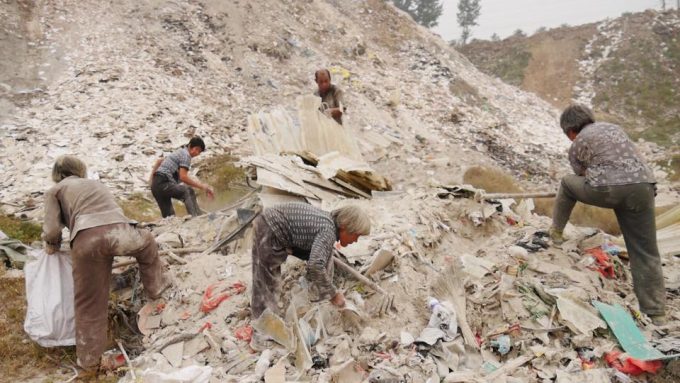 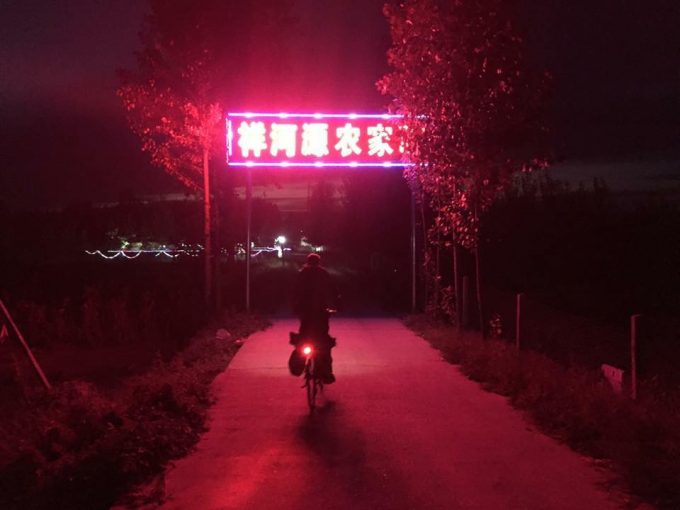 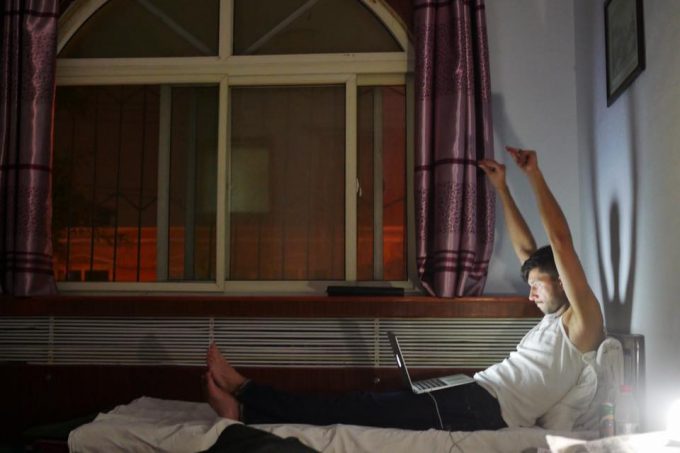 Today we saw the sun.

So it was that I was walking down a paved road in the middle of a field with lots of Chinese who were planting coal. They stop whenever I pass by, they pull out their smartphones and take pictures of me.

At some point, everything around gets a copperish hue. People’s skin mirrors the color of the ground they are digging. Could it be because of the fairy-like moment?

We look at the sky and see a window opening up in the smog, then the yellow sun replaces the reddish slop from the past days. We warch it happily and take deep breaths, it’s almost as if it dosesn’t even sting anymore…

Vruuuuum! An infernal rumble breaks the spell. It’s a high-speed train that runs across the field on some giant cement structures. It’s swallowing the horizon in a few seconds. If you don’t look up right away, you’ll only catch a glimpse of its tail.

Every other minute a train swooshes above the farmers who are working the fields; above the elderly who play GO under the bridge; above the women who are searching for raffia bags in themi rubble.

They all look tiny, minute on the background of highways, factories and gigantic apartment buildings that sprout on the field. It’s as if somewhere some giants are playing Civilization, and after drawing the infrastructure on the map they sprinkle it with people who fall between the cracks.

I think about all this while riding through the dark on a deserted six-lane highway, that rolls down a hill and then suddenly disappears; I realize I’m doing 40 km/h on the field. I slide 30 meters and my ideas disappear in a cloud of dust. The sky is red, in the distance some factories are burning. It smells of watercolours.

We reach a small half-a-million-people town, and no conventional hotel is willing to take us in. The receptionists chatter smilingly for about ten seconds, and the translation app states robotically ”We don’t host foreigners”.

I don’t understand how these things work, in some cities people are so chill, in others they are super paranoid. They send us downtown to the hotel for foreigners; we thank them and then search on Baidu Maps for Mr. So-and-So, who pulls us in his guesthouse with our bikes and all, and locks the gate behind us as if we are smuggled goods.