In a village in the Hubei province we stop to worship the God of Cake. He is a gruesome, but just god and He demands a sacrifice every day. We sit on a table in front of a small shop and rummage through a bag of sweet stuff.

A group of kids comes down the street. Clutched together and holding their breath, they are not looking at us. As they pass by they giggle and run away. Then they return. This happens a couple of times. They look so cheerful and curious, but don’t dare to get closer. Like we’re some dangerous animals in a zoo. 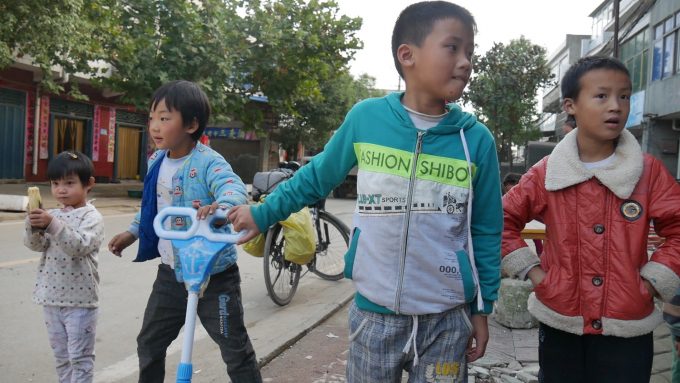 So at one point I get up and run towards them, with arms outstretched.

They scream, stampede, but eventually come back to oaaarrh! at me too and we laugh a lot and they are so happy to play with the strange animal that it melts my heart.

They patch together bits and pieces of English and soon I have to shake two dozen hands.

Hello!
My name is …
Nice to meet you!
Thank you! 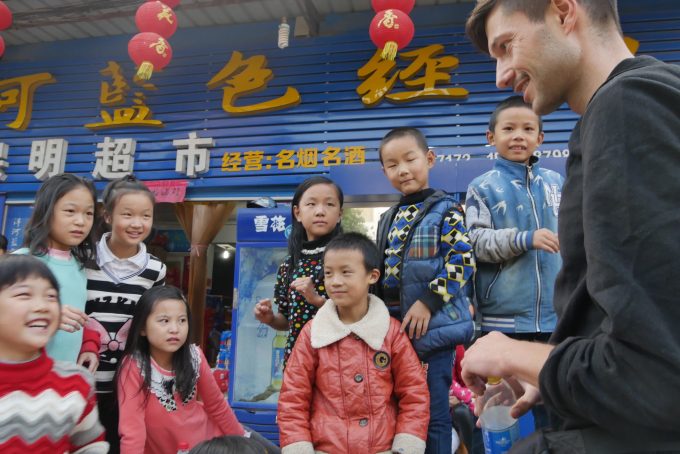 Sometimes even adults run away from us as we approach with a question. Often people look at us with awe, point fingers, jaws dropped. Sometimes I wish I could also just growl then, shake off the cultural shock, the feeling of being an alien.

The night before, in the hotel, we looked at some footage we shot earlier during this trip. It was from a night we’d rather forgotten. Our nerves were wrecked from riding through the rain on pitch-dark mud-flooded streets. We drove through a village where the opening of a drug store was celebrated, they had a stage, a fire-breather, some people seemed pretty loaded. We just wanted to take a look but got lost in a blaze of selfies, were dragged from one place to another, stuffed with more stuff than we could carry on the bikes, forced to endorse perfume. It was just too much and we escaped like villains.

It’s just that, when we watched the videos from that night, it didn’t look as terrible as we felt. Actually, people were just as cheerful and curious as the kids from today. Instead of high fives they wanted selfies. And instead of hugs they gave us stuff.

The difference in the perception wasn’t just because of our wrecked nerves that night.

When you encounter a stranger you typically ask yourself: Is there something behind the facade? What could he want from me? What can I get out of it? You scan his behavior and expect him to do the same.

We don’t do that with kids. We know that kids, in the best case, just do what they feel like. No intentions.

It’s only now I understand that it’s the same with most of the adult Chinese we meet. Once the first shock is overcome they are just as cheerful and curious as the kids. There are no intentions. They want to look at us. We want to look at them. After half an hour the novelty usually has worn off. And we’re just what we are. Intruders. Comrades. Buddies. It’s one sound safari. 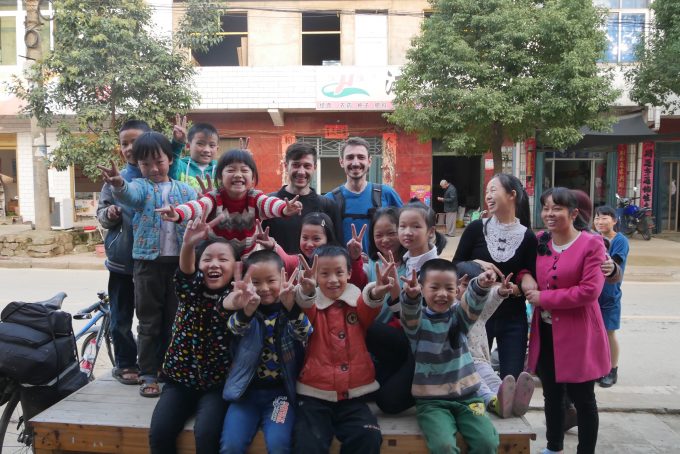