“We pushed our luck too hard this time”, says Vlad as we’re rolling behind the police. “I knew it.” The blue and red flashing lights on their old Volkswagen reverberate in the dust, the night, the small brick houses of Baozhuangcun. 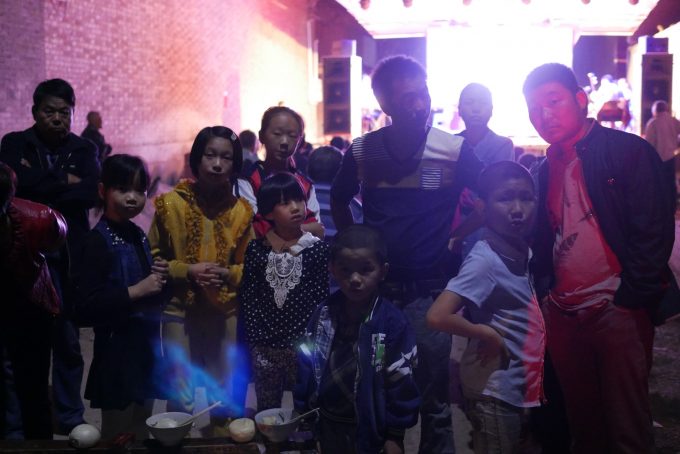 We were the talk of the town. Maybe not everybody liked that. Us walking around with our white faces and black beards, filming everything. Getting free food. Stealing away the show from the singers on the stage. There was this old man who beckoned me two times to put the camera away. I had ignored him.

“If they question us, let’s just stick to the stories from our Visa application”, I say. The police car turns left onto a tiny road that leads out of the village. “Follow us”, they said. 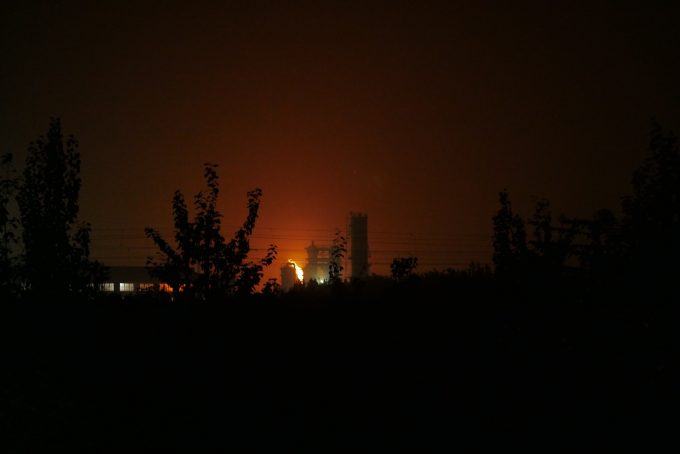 The day before we were in a bit of a gloomy mood. We had met so many nice and friendly people during the ten days we’re riding our bikes through China. But still, those encounters were brief, often superficial. We exchanged basic facts: how old are you, what is your job, are you married. Made the mandatory selfies. But more personal questions? Shaking heads. Hands waving: stop. Like pushing the mute button.

Sometimes people just stared at us. Like we were aliens. Which is kind of true, of course. For most of the people in this rural region we’re the first foreigners they’ve ever seen.

We wanted more. We decided to change tactics. Become more intrusive. Get inside courtyards and houses.

It worked and it was amazing. We got invited into people’s homes, got drunk with ten Chinese men, they even gave us some medicine that can cure everything. 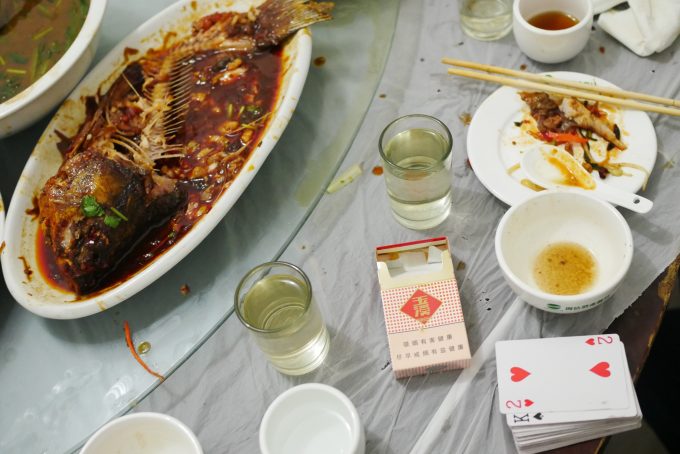 Finally, in the evening we reach Baozhuangcun, a village with six streets. On one of them a stage is set up. There is traditional music, a band, a woman singing something very dramatic, unbearably loud, big golden rubber lions, the crowd sitting under chains of colorful lights. 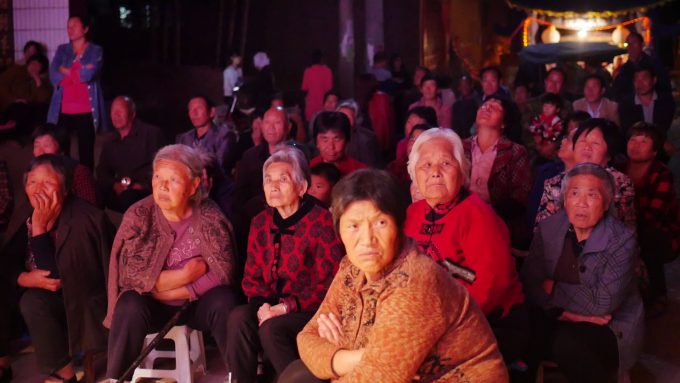 Naturally, we have to see it. We film and people film us filming. Soon, it seems more people look at us than at the performance. I drag a tail of laughing children behind me. I try to take photos, but it’s like a dog trying to bite his own tail. Whenever I turn around they turn around too or hide their faces or run away.

At the end of the street, some people sit on the floor of a big tent. They wear white headbands and didn’t seem as cheerful as the others. Maybe they are waiting for their turn to get on stage, I think. They’re just concentrated. 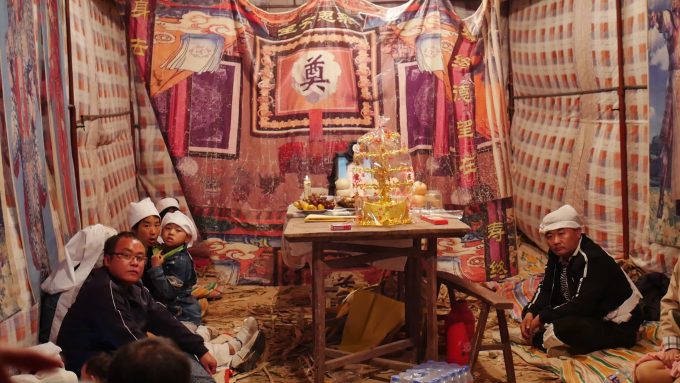 On a table there are bowls of fruit. I ask if they sell food. “No, but I can give you some”, a young woman says while an old man pulls my sleeve and waves at me: Get out of here.

It turns out we’re at a funeral. 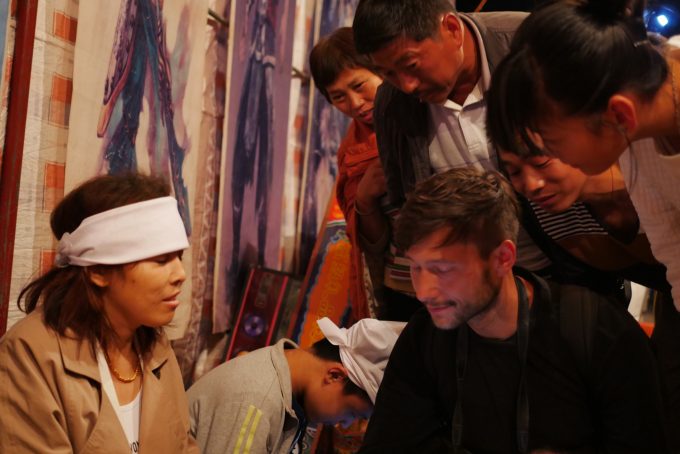 We prepare to go but then a man brings us bowls of stew, chopsticks and steamed bread. Another man brings a sort of bench for us. Someone else gives us two bottles of water. We face the stage but can’t see the singer because we’re surrounded by people watching us eat. A handicapped guy is jumping up and down and clapping his hands.

Let’s go, Vlad says, I feel we’re pushing our luck. As we get on our bikes and start riding out of the village someone yells Wait! Wait! A crowd of people is coming towards us. They are led by three policemen. Let’s just hit the road, I think. But it’s too late.

On a map we point to a hotel in the next city. Two policemen stay with us, one is getting on the phone. 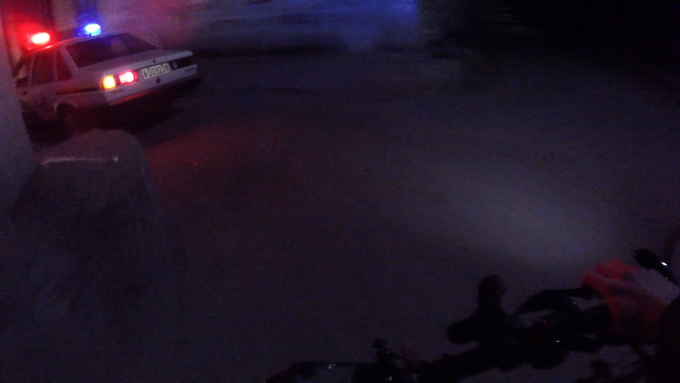 So now we’re driving behind them synchronizing our stories. What should we tell them about the bicycle tour?

We reach the highway. The police car turns left and stops under a bridge. The cops get out, signal us to stop. Are they going to beat us? 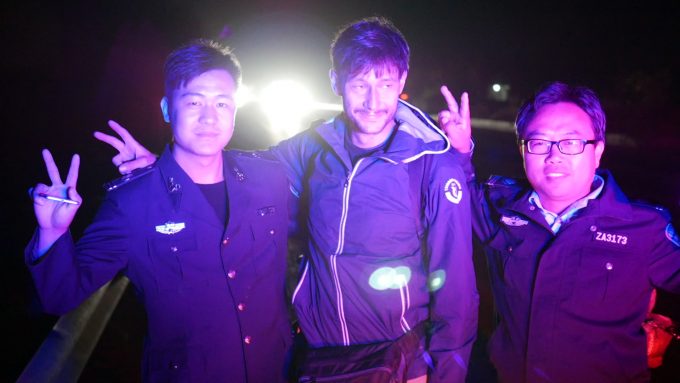 “Let’s make a photo”, they say. We’re so relieved we almost yell at them “Yes, Yes, photo!” They take selfies with us, arms around our waist, the blue and red lights on the police car still flashing.