We enter Weishi, about 700 Kilometers south of Beijing, on a huge boulevard. After riding through pitch dark country roads strewn with potholes we now have six lanes illuminated by chandelier-like street lights just for us. For two kilometers almost no car passes, just a few electro scooters and tricycles, the vroom of trucks overloaded with sand.

This road is obviously planned for the future. A future with much more people than now live in Weishi, a county with about 870.000 inhabitants. The houses for the people who don’t live here yet are also being built already. Empty high-rises between fields, shabby eateries and factories form a nightmarish skyline, like a sinking cruise ship. 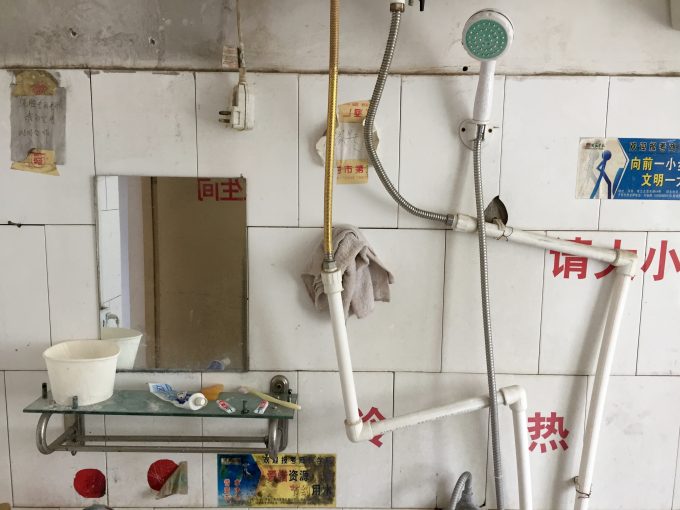 We arrive at a small inn, the owner sits at a desk, doodling on his computer, a meter away from the entrance. He is a close talker, he is fascinated by our translation app, he is spitting on my phone’s screen and I’m afraid his big yellow teeth are gonna haunt me in my dreams. He takes out his reading glasses, squints at our passports for a while, then slams them shut. Aw, just take them and go upstairs!

The bedsheets feel unwashed. Through windows blind with dirt green and red billboards blink from across the street. A coat of dust covers a huge TV from the 90s. On the bathroom’s wall a maze of cables and pipes, old toothbrushes and detergents on the windowsill. 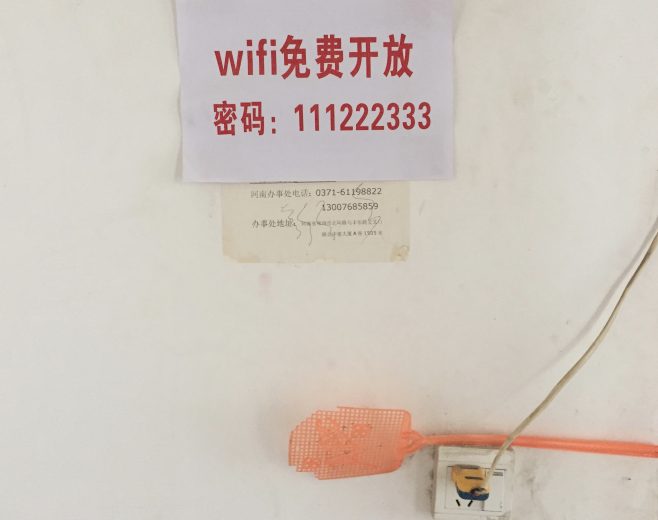 The next morning I go downstairs. The owner is hanging up bedsheets to dry in front of the hotel. His oldest daughter is chopping up meat and vegetables.

His son, a sales man and wedding DJ, passes by during his lunch break. He wants to know if we are rich and he video-calls his girlfriend at work to show her the beardy man from Germany. I’m wearing trackpants, I have a cold and haven’t showered in two days. His girlfriend says: “You are so cool!

The owner’s youngest daughter is breastfeeding her three-month old baby whose name translates as Gorgeous. She is an English teacher but doesn’t like to read. “I like the hero movies. Like Iron Man”, she says.

Her brother streams some American Wrestling on the internet. The hotel’s lobby in which all this happens is not even half the size of the wrestling ring. Gorgeous loses her shoe and her mom doesn’t have a hand free. She looks at me. I put it back on. 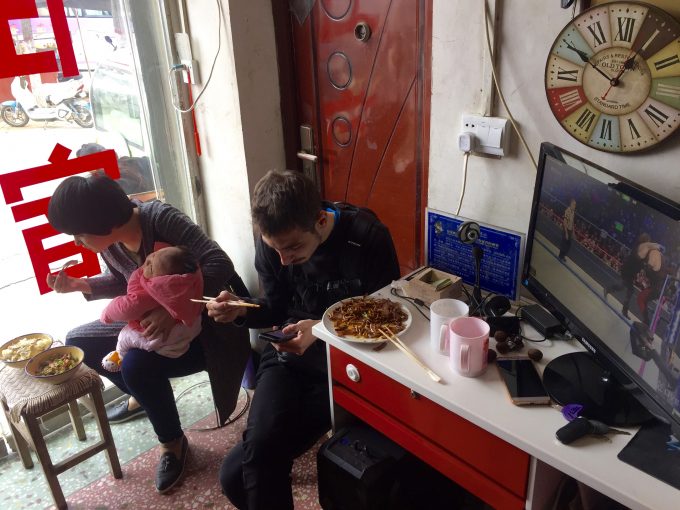 Her father has three daughters and one son. We ask her how this is possible: Didn’t China have a one-child, with forced abortions and sterilizations? “My dad had to pay a lot of money to the police”

Well, the first kid is for free.

The fourth 10.000 Yuan, her dad tells us and her. She didn’t know her price. It’s less than what I payed for my (used) bicycle in Beijing.

But not everybody had to bribe authorities to be able to have more than one kid. China introduced the one-child policy in 1980. It put about one-third of Chinese households — 90 percent in cities — under a one-child limit. This year the policy was officially abandoned.

China’s society is aging faster than it gets rich, and might soon have more new retirees than new workers. So the Communist party’s propaganda machine now urges women to have at least two children, sends letters to state employees to reproduce for the sake of the nation and stigmatizes college-educated women who delay marriage as unappetizing “leftovers,” or sheng nu.

After all, a lot of  bright boulevards and empty high-rises still need to be filled with life. 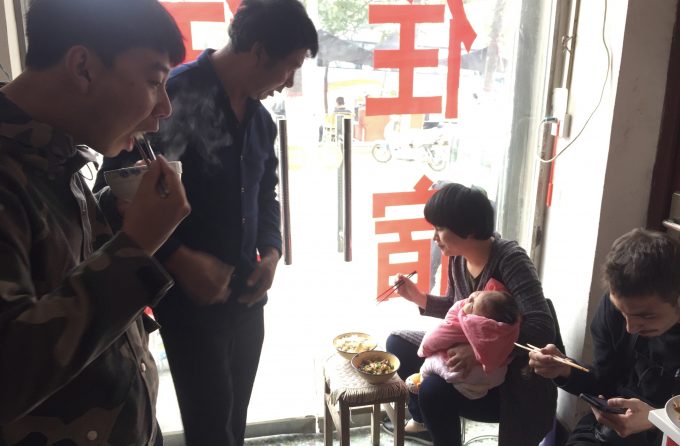 For this family the hotel is just a side job. They used to be cotton farmers, but a couple of years ago they rented the hotel for 30.000 Yuan per year. Their guests are salesmen or factory workers and usually stay for just one night to catch the first bus in the morning to Kaifeng, the next big city (the former capital of the northern Song dynasty). They kept their fields and grow corn, wheat, soy beans and peanuts.

That explains why we saw so many people working on fields late at night or wearing street casual while sitting on a tractor. They came from their daytime jobs to work the fields.

Full-hearted farmer and half-assed hotel owner – our host is running a typical business model, it seems. But more often a family’s income is mainly provided by children who moved to a city to work in a factory. For this kind of migration the state has built the ballroom-like boulevards.

As we leave the owner gives us his business card. It says the name of the hotel is Good Luck. Or Be Rich. It can mean both, his daughter says. 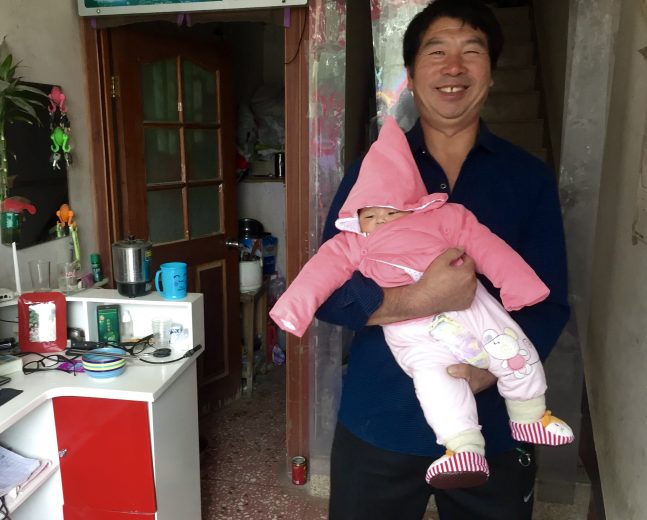